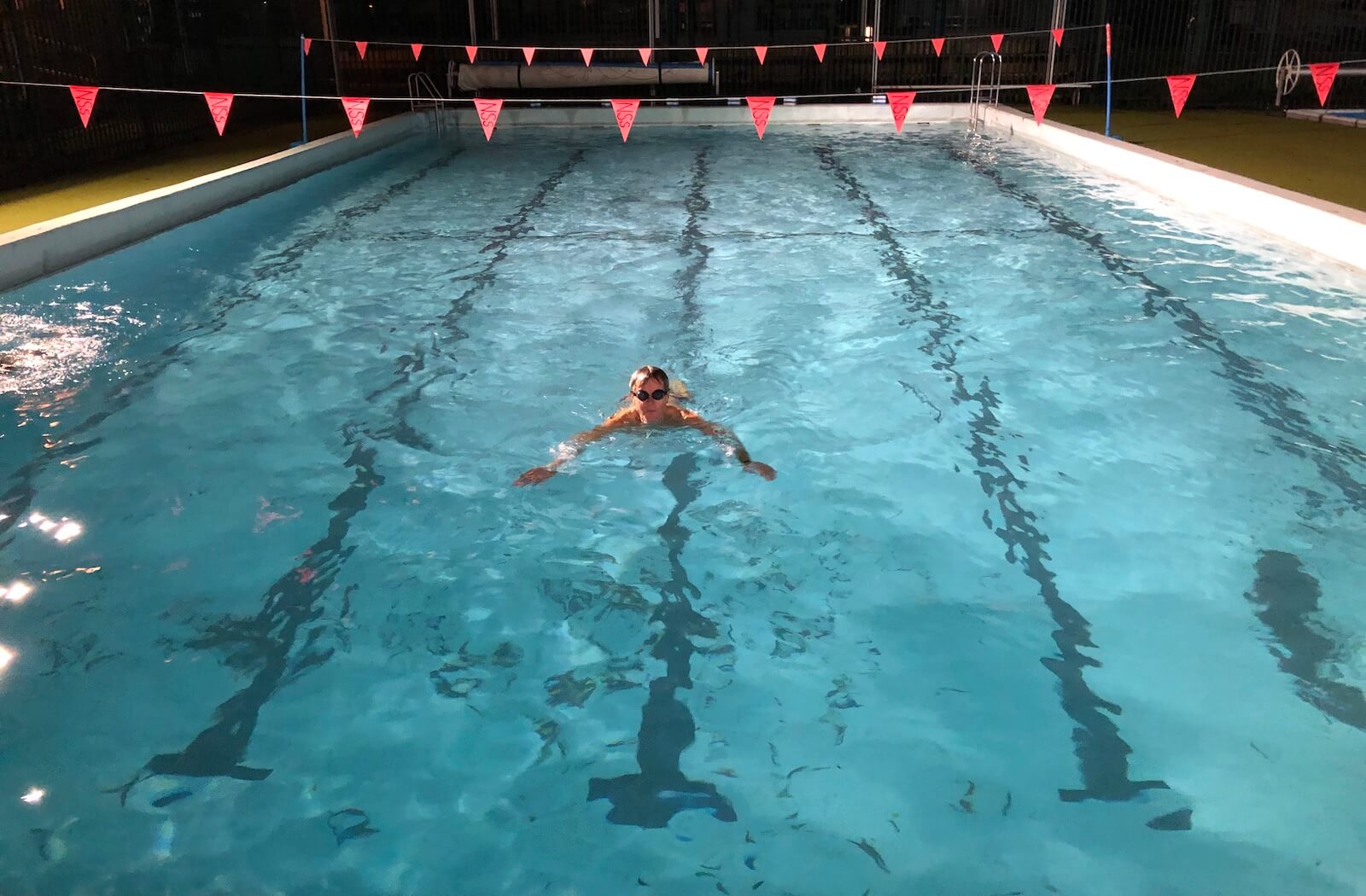 Cronulla Swim Club is one of the oldest clubs in the Sutherland Shire.  The formation of a swimming club at Cronulla was proposed in the middle of 1919 by Mr Neville William Cayley.  Mr Cayley is the world famous ornithologist and artist, and author of the famous ‘What Bird is That?’  Mr Cayley was then the Captain of Cronulla Surf Life Saving Club (SLSC) and was the foundation Captain and Treasurer of that club in 1907.  After the first World War there was a need to build up that club again, many of its members having served in the armed forces.  There was a need for stronger swimmers for both rescues and competition.

Cronulla Amateur Swimming Club (our original name) was formed on 1 December 1920.  Our first President was Mr Walter James Chiplin who was the second principal of Miranda Public School and then President of Cronulla SLSC.  In those days swimming was a segregated sport – men and boys could not compete with ladies and girls.  Cronulla ASC was for men and boys only.  In 1921 Cronulla Ladies Amateur Swimming Club (LASC) was formed.  The only worthwhile swimming pool in the Shire at this time was the Gunnamatta Bay Baths, not the present baths but an earlier wooden structure, 70 yards by 60 yards, built in 1915. Gunnamatta Bay was our home until 1967.

Two of our outstanding early swimmers were Rupert Michaelis (220 yard champion in 1925) and Jack Miller who won a number of awards in the late 1920s and early 1930s.  Jack Miller was also the champion surf racer at Cronulla SLSC from 1929 to 1938.   The historian of Cronulla SLSC has written that the formation of our swim club was “vital” to the future of that club.  In our early days club competition was held on Sunday mornings.  On Sunday 1 October 1933 competition was interrupted when it was learnt that a fishing vessel had overturned at Boat Harbour and six members had to leave to man Cronulla SLSC’s surfboat to attempt a rescue!  One of those rescuers was Lachie McPherson who urged our swim club and Cronulla SLSC to cooperate “in order to cultivate better swimmers” for both pool and surf.  Under his influence our club was rejuvenated.

In 1939, the original Gunnamatta Bay Baths were demolished and the present mesh enclosed structure, 200 yards long, was erected.  However, that year also saw the beginning of the Second World War and the club went into hibernation “for the duration”.

The club sprang to life again in 1945, under the leadership of Mr Jim Peryman, Captain of North Cronulla SLSC.  Competition was now held on Saturday afternoons.  Membership was small but included members of both surf clubs.  The club helped launch the remarkable swimming career of Bobby Johnson who excelled as a surf racer for North Cronulla SLSC.  Membership started to grow for both the men’s and women’s clubs.  This was assisted by the construction by Sutherland Shire Council of a wide catwalk from the south walkway of the baths to a 55 yard island platform that had been erected in 1939 and the provision of starting and turning blocks at each end of the 55 yard course.  Lighting was also provided for night competition.  Tragically, Jim Peryman drowned whilst performing a rescue at North Cronulla beach in 1950 and this event so affected our members that the club ceased to function for a while.

The interruption, however, was short.  By the late 1950s both the men’s and women’s clubs were thriving and conducting very successful, free learn to swim campaigns at Gunnamatta Bay, serving the rapidly growing population of the Shire and teaching thousands of “baby boomers” how to swim.  Many who were taught to swim by the Club joined its ranks and many teenage members then went on to volunteer as instructors.  In the 1950s Mr Frank Jordan was coach to a swimming squad at Gunnamatta Bay and trained many of our swimmers and also surf club members.  He contributed greatly to the Club’s success in the 1950s and 1960s.  Frank had been a member of Bankstown ASC and trained under that club before moving to Cronulla.  He was a member of Australia’s water polo team at the Helsinki Olympics in 1952.  Frank trained many Club members who excelled in District and State Championships and also in Surf Life Saving Competition.

One of our current committee members paints this portrait of club life in the early 1960s.  On Saturday mornings, Frank Jordan’s swim squad commenced at 6am and swam until 7.30am.  At 8am, Learn to Swim classes started under honorary club-trained instructors who were also qualified with NSW Swimming Association.  Learn to Swim classes were “mixed”.  Members of the men’s club had to “put their names down” to enter competition by 8.30am.  One had to write one’s name in a list for each event the member wanted to enter.  All non-championship events were handicapped, the idea being that everyone should finish the race at the same time.  Handicapping was a long, tedious procedure as an official would have to look up a card for each member for each stroke and distance to find the member’s last or best time.  It used to take one and a half hours to do what the computer can now do in ten minutes!  Competition started at 10am and would generally not conclude until 11.30am or noon.  If there were girls and boys in the family it was their time for a picnic in Gunnamatta Park as competition at Cronulla LASC commenced at 2pm!  The ladies competition followed the same format as the men’s club.

All pool officials, starter, timekeepers, recorders and marshalls wore a uniform of white shirt, white shorts and white long socks (men) or a white dress (ladies).  Handicap races were started by whistle and championship events by a starting pistol.  And the favourite race day was  “Plum Pudding Day”!  Our clubrooms at Gunnamatta Bay are now occupied by Cronulla RSL Swimming Club.

1959 saw the commencement of competition for the HV Betts Memorial Trophy.  Mr Betts donated the original trophy which was renamed “Memorial Trophy” after his death in 1961.  Mr Betts was the licensee of the Cronulla Hotel.  The event was a 10 by 55 yards relay race conducted at Gunnamatta Bay Baths between our club and Cronulla, North Cronulla and Wanda SLSCs and Cronulla RSL Swimming Club.  The RSL Club competed only for 2 years.  In 1968 Elouera SLSC joined the competition.  This competition continued until the early 1980s.  Many of the Surf Club competitors were or had been members of the Swim Club!

1967 saw the opening of Caringbah Olympic Pool (now Caringbah Leisure Centre) which provided a much better venue for swimming than Gunnamatta Bay: no tides, no pollution after heavy rain, no jelly blubbers, no sea-lice, and you could see the bottom of the pool!  Both the men’s and women’s clubs moved to Caringbah after the opening of the pool.  However, the Learn to Swim Campaign remained at Gunnamatta Bay for many years afterwards.  Shortly after the move to Caringbah , swimming officially became “mixed” and Cronulla ASC and Cronulla LASC then merged into one club under the title Cronulla ASC.  When the club was incorporated under the Associations Incorporation Act 1984, the Club’s title was shortened to Cronulla Swimming Club and recently, in 2006, it was further shortened to Cronulla Swim Club.

Our name is now short but our history is long and distinguished.  We still perform our original role of providing “strong swimmers”, for pool, surf and water polo competition but, more importantly, we provide our members with an essential life skill, the ability to swim and to swim well.

And, perhaps as a tribute to Mr Cayley, our badge remains a seagull flying over the waves!